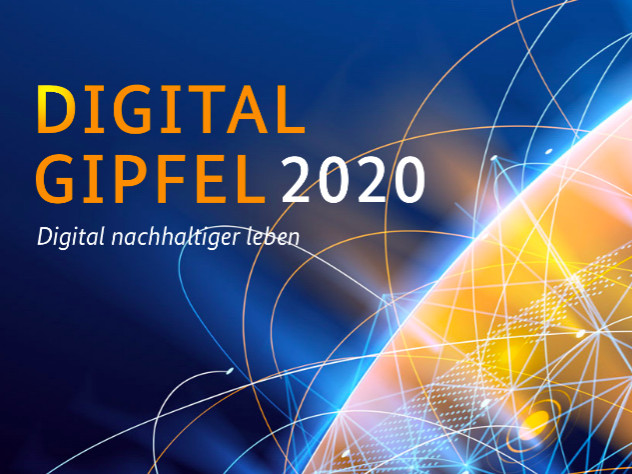 Since 2016, the Digital Summit has been held annually by the Federal Ministry for Economic Affairs and Energy. It serves as a central platform for shaping digitization and the digital transformation of business, government and society in the Federal Republic of Germany. This year, the focus was on digitization and the sustainable development. Digital Earth was invited to present four virtual stories.

Floods along rivers affect more people worldwide than any other natural hazard. Due to climate change and socio-economic changes, a significant increase in flood damage is expected in the future. Mitigating flood risks requires the understanding of how flood events emerge and what kind of impacts they entail. For this, processes and interactions of different Earth system compartments must be recorded, from the atmosphere to river landscapes to the coast as well as diverse human interventions.

There millions of tons of old munitions and explosives on the seabed, which were dumped there mainly after the end of World War II. Since the position of these objects is rarely known, areas of interest (e.g. for shipping) have to be investigated and cleared. In order to achieve this, the seafloor is mapped using various methods. The collected data is then analysed by experts, and suspect sites are identified and investigated. This is a time-consuming and costly process. In Digital Earth, workflows and methods of data analysis are developed in order to analyse different data sets together. In this case, we use neural networks to help experts select suspicious points and analyse data in real-time.

Due to the shortage of metals such as copper or nickel, but also of rare Earths, an actual start of deep-sea mining is becoming more and more likely. The development of extraction techniques for manganese nodule mining in water depths of more than 4000m is progressing. In the process, the 'vacuum cleaner-like' extraction removes the top 20cm of the deep seafloor, which also creates a significant cloud of sediment. Depending on density, internal turbulence and the near-bottom current, this sediment cloud spreads and covers larger areas after depositing. In the 4D Digital Earth Viewer we combined sensor data, terrain and flow models in the in order to prepare a test mission planned by the Federal Institute for Geosciences and Natural Resources together with GSR/DEME from Belgium in 2021.

Methane is a potent greenhouse gas that enters the atmosphere from natural and anthropogenic sources in the North Sea. Measurements in the water and atmosphere are visualised and explored with model data in an integrated 4D approach. The aim is to determine the amount of methane released from the North Sea and compare it with model calculations for the atmosphere. Ideally, both quantifications should be the same. The show case "Methane budget of the North Sea" of the Helmholtz project Digital Earth demonstrates workflows and data science approaches to enable such a comparison by using visual methods. Measurements and model data from the last 40 years were used, such as temperature, salinity of the North Sea as well as methane content and wind speeds of the atmosphere.